You know we love old stone fireplaces and chimneys. So we couldn’t pass up the opportunity to share a story about a little lonely chimney that’s lost its home. This information comes to us from architect Leonard J. Baum. 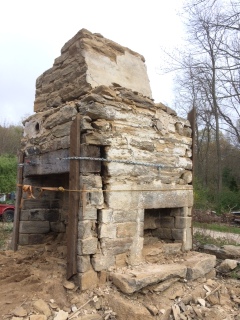 How did this stone chimney become an orphan, you ask? It was originally attached to a 3/4 timber-framed cape, circa 1720-1740, located in Rhode Island. The home rotted and collapsed in on itself, leaving the stone chimney to stand by its lonesome for several winters until, last year, when frost heaves made it necessary to carefully disassemble the structure and store it away for safe keeping.

According to Baum, the chimney cap was fashioned of hammered smooth stones, packed in red clay. Walls were constructed of dressed stone, laid up in very soft lime putty; infill between walls and flues appeared to be a mixture of stone chards and red clay. The bake oven was topped with a turtle-shaped stone and featured a wrought-iron lintel. The kitchen fire box featured a chestnut lintel. 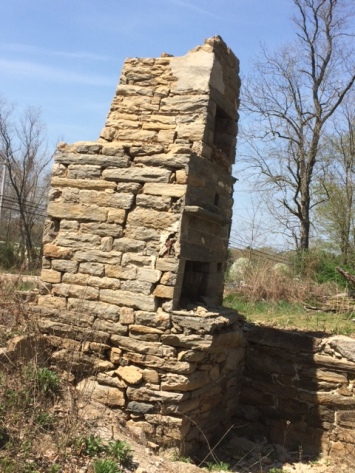 The chimney is almost completely dismanteled and sitting on pallets, with the fireboxes mapped and marked. Baum seeks a new owner who will incorporate this structure into a new or vintage design and also more information on this early American form of masonry. For more information, visit ljbarch.com. 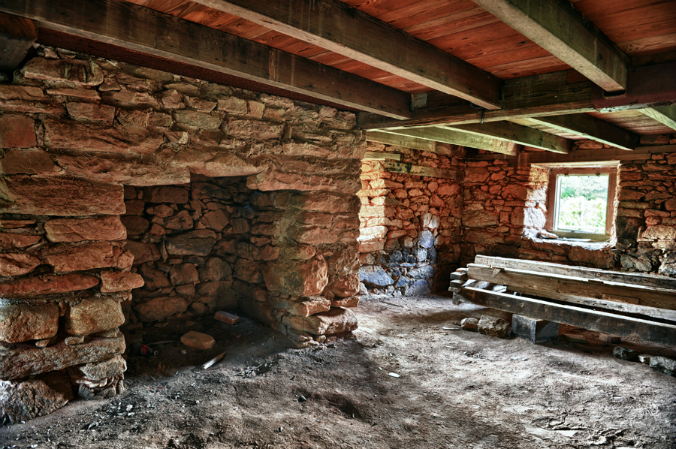 It’s pretty safe to say we have an ongoing love affair with fireplaces. Who doesn’t ooh and ahhh at the site of chimney ruins or perk up at the very mention of a wood-burning fire. Aside from the crackle and pop of oily logs as they simmer in an open hearth, what draws us so keenly to these expansive structures? With blizzards lashing the East Coast and all eyes on the weather forecast, it seems a perfect time to focus on old stone fireplaces and their importance in the design of early American homes. 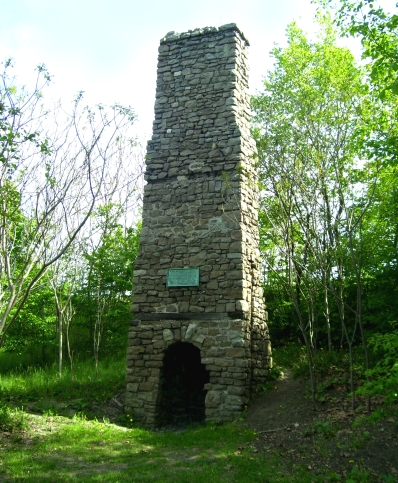 The earliest fireplaces were cut out of one side of a single-room dwelling, log cabin or cottage, with an exterior chimney of clay over a sturdy, upright stick frame. The interior was coated with more clay, mud or plaster to fireproof the structure. These so-called “Welsh chimneys” or “mudcat chimneys” were certainly a fire hazard and eventually gave way to sturdier structures of brick and/or stone. 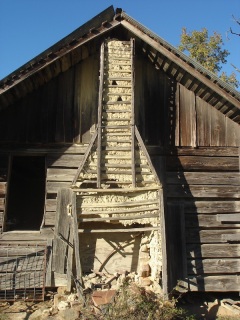 In Colonial New England a centrally located chimney quickly became the norm. The stone column itself radiated heat while large fireplaces within the chimney faced out to each of two first-floor rooms. If the first floor was not at ground level, a fieldstone chimney would have been supported, underneath the first floor, by a load-bearing foundation of brick, fieldstone, rubble stone or a mixture of all three. The rectangular structure measured 5 to 10 feet on each side and featured timber “cradles” at the ceiling to further support the chimney. Oftentimes, a bake oven was installed inside this foundation.

In the Mid-Atlantic and Tidewater regions, chimneys were embedded in end walls or pushed to the outside completely. End chimneys served two purposes: to keep heat out of the home during summer months when the fireplace was used for cooking and to allow for a front and back door connected by a central hallway — and much-needed cross ventilation.

Unique to the Delaware and Hudson Valleys and Dutch settlers was the “jambless” (sideless) fireplace comprised of a stone or dirt hearth, an iron, brick or stone backing to protect the wall behind it and a hood and chimney that led the smoke up out of the home. Bonus: Residents could sit on three sides of the fireplace. Drawback: The hood was an ineffective way to draw smoke out of the home.

Early stone fireplaces were massive (12 to 15 feet in width). Why? The fireplace served as a light and heat source (both day and night in cold weather), cookstove and storage space for a vast array of cooking equipment – spits, pots and more. Constructed of native stone, the fireplace featured an opening capped with a piece of timber or stone (lintel or “mantel tree”) from which cooking tools hung. From this lintel the formal mantelpiece evolved.

Although the stove replaced the open hearth as a means of cooking food, we are left with these lovely reminders of days gone by. And thanks to caring homeowners and historic preservation groups, examples of old stone chimneys and hearths will remain for generations to come.

Resources:
Early Cooking Hearths by Gregory LeFever
Early American Architecture: From the First Colonial Settlements to the National Period by Hugh Morrison
The Mabee House: Jewel of the Mohawk Valley
Colonials: Design Ideas for Renovating, Remodeling, and Building New by Matthew Schoenherr
American Architecture: An Illustrated Encyclopedia by Cyril M. Harris
Grandeur and Grace in the Ohio Country; Building America from the Ground Up, 1784-1860 by William E. Firestone

Got a question or think we should feature an old stone home in your area? Email us at oldstonehouses@gmail.com.
Loading Comments...