The oldest surviving house in the upper Hudson Valley also happens to be (from the research we’ve done) the oldest stone dwelling in the state of New York. The story of this sweetheart of a stone cottage begins with Pieter Bronck, a sailor from Holland, who emigrated with his wife, Hilletje Jans, to the colony of New Netherlands in 1653. They originally settled at Fort Orange (now Albany, New York) on the banks of the Hudson River, and made their living as tavern keepers and brewers.

Bronck. Hmmm. Sounds a lot like Bronx, right? Peiter happened to be a close relative of Jonas Bronck for whom the borough is named. 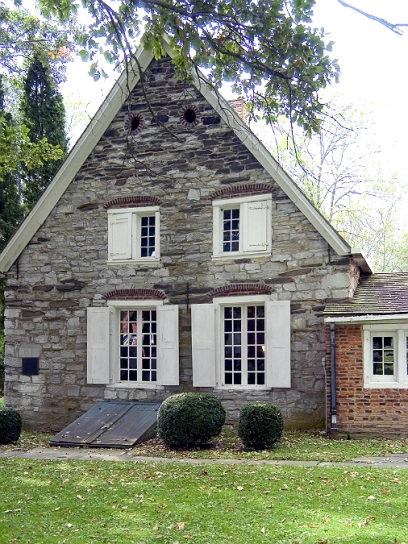 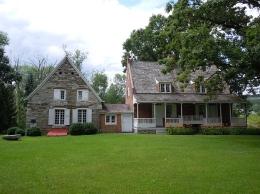 The life of a tavern keeper was not without its trials, and Pieter experienced his fair share of financial troubles. Hoping for a fresh start, the couple set their sights on the Catskills region of the colony and a life of farming (and perhaps fur trading). So in 1662, Pieter headed downriver to purchase 250 acres of land from Wappinger Indians in exchange for 150 guilders-worth of beaver pelts. He chose his tract of land, which native peoples called “Koixhackung” (now the town of Coxsackie), for its proximity to a major trade path.

The home built on the site a year later reflected rural Northern European home building practices of the time. The one-room 20′ x 20′ structure (we’re talking only 400 square feet!) featured 12-inch-thick fieldstone walls and massive 14- by 8-inch beams that supported a small storage garret and roof above. Wide-planked 18-inch floorboards and a hand-dug cellar were more defining features. The home was expanded in 1685 with a hallway, main room and loft, and in 1738, Pieter’s grandson, Leendert and his wife, Anna de Wandelear, built a brick home that was then connected to the stone cottage by what was called a “hyphen hallway.”

Farming as a profession proved a wise choice for this family, as through the years, they expanded the property with outbuildings. The estate passed through eight generations of the Bronck family until 1939, when the last family owner, with no heirs, gifted the farming estate to the Greene County Historical Society, which has maintained the home and land as a museum ever since.

Wondering how the original stone home has survived nearly four centuries? Credit must go to caring members of the Bronck family and their ability to keep this home within the family. Its location also played a part – off the beaten path, away from the harsh elements of the coast, etc. And lastly, its solid stone construction. Those New Yorkers know a thing or two about building homes that last ;-).

Stone homes don’t immediately come to mind when one thinks of Southern states and early American architecture. That’s why the Rock House, located in Thomson, Georgia, is of such particular interest.

The oldest stone home in Georgia, the Rock House was built by Thomas Ansley, a farmer born in Monmouth County, New Jersey, in 1737. After 1760, Ansley lived in North Carolina and then moved to Wrightsboro, a Quaker village located in Warren County, Georgia, before 1773. 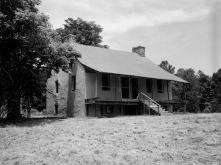 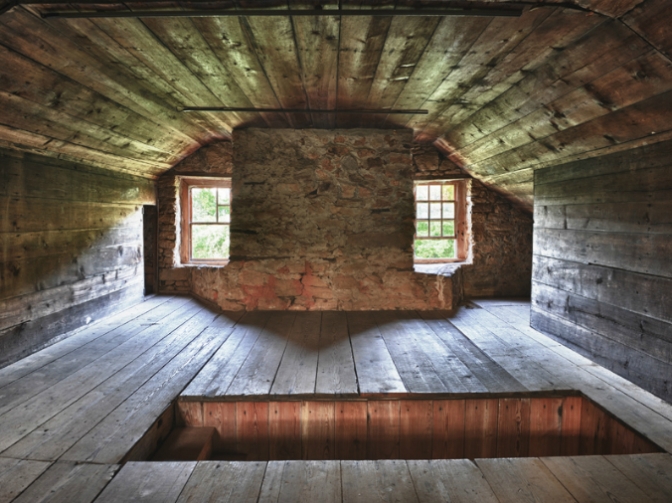 It was here in Wrightsboro, between 1783 and 1785, that Ansley built his stone home, using construction methods brought with him from the Delaware Valley of New Jersey. The weathered granite that was used to form the home’s two-foot-thick walls was quarried near the home site and locally sourced pine and cypress comprised the timbers and shingles respectively. The one-story fortress-like home featured a raised basement with large walk-in fireplace where meals were cooked, a main floor with parlor and bedrooms and a full attic.

The Rock House is owned by the Wrightsboro Quaker Foundation, which restored the house in 1981. The home is listed on the National Register of Historic Places and is said to be haunted.

The Richard Wall House, circa 1682. Source: Eric and Noelle Grunwald.

We have a devote Quaker to thank for the oldest stone home in Pennsylvania. Richard Wall came to America in the mid-summer of 1682, after purchasing 600 acres of land directly from William Penn. His land grant, along with 13 others, came to form Cheltenham Township, named after Cheltenham, England. 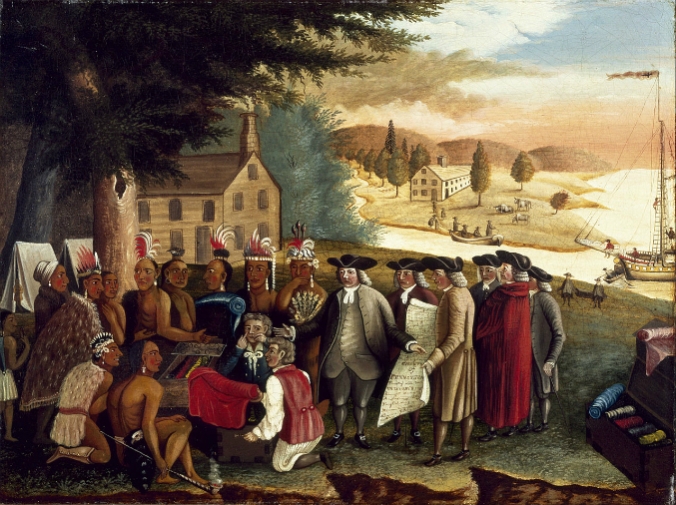 Wall’s home, coined “The Ivy” for the series of vines that once climbed its stone walls, certainly played its part in the early history of America. The humble Elkins Park abode served as one of the earliest Quaker meeting houses (and wedding/reception site for families within the congregation) and, later, a very important stop along the Underground Railroad.

And like most old stone homes in the states, the Wall House was a work in progress – at least for the first 245 years of its life. In 1682, shortly after arrival in Pennsylvania, Richard Wall built an 18’ x 30’ two-story log cabin with grey fieldstone end and fireplace. This style was in keeping with William Penn’s own suggestions on home style and construction and adapted from methods learned by the first wave of Quakers who migrated to New England during the 1650s-1670s and brought the building style back with them to England. (See our feature on construction method by region; New England stone enders). Subsequent tweaks and additions to the home came in 1730, 1760, 1760-1790 (when the log portion was removed), 1805, 1860 and 1927.

The original portion of the Richard Wall Home, constructed in 1682, may have looked quite similar to John Wormley’s family home, a circa-1769 log cabin located in Camp Hill, Pennsylvania.

The Henry Whitfield House, located in the village of Guilford, is said to be the oldest dwelling in Connecticut and the oldest stone home in New England. It served as the family residence of Reverend Henry Whitfield, who, along with a group of Puritans fleeing religious persecution in England, founded the plantation of Menunkatuck (later, Guilford) in 1639.

Whitfield’s home is impressive for its time and location. The two-story structure (one of four stone homes that served as community leaders’ residences) doubled as a fort, a church and a gathering place for settlers. Fashioned in the post-medieval domestic style popular in England at the time, the home features 3-foot-thick battered stone walls, massive stone chimneys, a steeply pitched wood-shingled roof and casement windows.

What often goes untold is the story of the home’s connection to Native Americans. The land that comprises the original portion of the settlement was purchased from a female chief named Shaumpishuh. Her small band of 47 people, the Menunkatuck, derived from the larger Quinnipiac tribe; she sought to sell her tribal land in an effort to escape persecution from bands of warring Pequot and Mohawks.

And although carpenters, masons and home builders from neighboring settlements were called on to assist in the construction of Whitfield’s home, Native Americans who chose to remain behind after the land transfer bore the burden of hauling the heavy fieldstones to the home site. They managed this job by first gathering stones from a ledge called Griswold’s Rocks, piling them atop hand-barrows (example shown above) and carrying the heavy loads along an ancient causeway cut through a swamp to the home site, nearly 1/4 mile away.

We might conjecture that these native peoples also contributed to the home’s construction, as the majority of early settlers in Guilford were farmers (coined “planters” in early documents).

What is the oldest (still-standing) stone home in the United States? In a state-by-state series, we’ll explore that very topic while highlighting some of the country’s most magnificent structures. Delaware and a little stone farmhouse lovingly referred to as the “Old Swedes House” is the first stop in our tour.

Hendrickson House, Wilmington, DE, circa 1690
This 1 1/2-story farmhouse was built by Swedish settler Hendrick Johansson as a wedding present for his son Anders. Originally nestled along the bank of Crum Creek (from the Dutch, meaning “crooked creek”) in Chester County, Pennsylvania, the home was dismantled in 1958 and rebuilt on its present site at Old Swedes Church.

Although Swedish settlers (the first to establish themselves in Pennsylvania) were credited with introducing the log cabin to America, this home was constructed of fieldstone, which would have been plentiful in and around the homesite. Hendrickson House is a fine example of Swedish Colonial style and originally featured one large room on the first floor and one large bedroom above. The home was owned by four generations of the Hendrickson family before it was sold in 1788 for use as housing for tenant farmers.

“The Crum Creek history reports that the stone house measured 30 by 20 feet and faced southwest overlooking Crum Creek and the Delaware River across to New Jersey. In the center of each of the two longer walls, front and back, was a door, flanked by a window on either side. The gambrel roof was supported by the end walls and by heavy, hand-hewn pine beams which extended two feet beyond the face of the front and rear walls to form protective eaves over the first floor doors and windows. Inside, the northwest wall was completely filled by a huge fireplace, an adjacent wood closet (fed by a hatchway to the outside), and in the right-hand corner, a narrow, winding stair leading to the second floor. The large upstairs room was used for sleeping quarters and was heated by a second fireplace.” Source: Genealogy.com

Got a question or think we should feature an old stone home in your area? Email us at oldstonehouses@gmail.com.