Founding father and third president Thomas Jefferson was a proponent of stone and brick home construction.

…We … will produce no permanent improvement to our country while the unhappy prejudice prevails that houses of brick or stone are less wholesome than those of wood … A country whose buildings are of wood can never increase in its improvements to any considerable degree. Their duration is highly estimated at 50 years. Every half century then our country becomes a tabula rasa, whereon we have to set out anew, as in the first moment of seating it. Whereas when buildings are of durable materials, every new edifice is an actual and permanent acquisition to the state, adding to its value as well as to its ornament.”

Thomas Jefferson was quite dismayed by colonists’ insistence on building timber-framed homes, of which he wrote, “It is impossible to devise things more ugly, uncomfortable, and happily more perishable.”

Ouch! Harsh words. But why all the masonry haters in early America? Back in the day, stone homes were considered a big no-no, at least if you spoke to early colonists who migrated to New England and the Tidewater region from southeast England. The reasoning was thus:

English colonists built homes to resemble those they left behind, like this 17th century home located near Chelmsford, England.

The Parson Capen House, located in Topsfield, Massachusetts, is a fine example of 17th century New England architecture. The home bears a strong resemblance to houses in Toppesfield, England.

Who loved a cozy, solidly built stone home? Dutch settlers in the Hudson valley of New York and northern New Jersey, and German, Quaker and Scots-Irish settlers in eastern Pennsylvania. Each group constructed homes in farm styles similar to those they left behind in the Old Country. The best way to cure the damp caused by condensation, wrote Jefferson? Light a fire!

This all-stone cottage, located in Northern England, would have served as a farmer’s home. 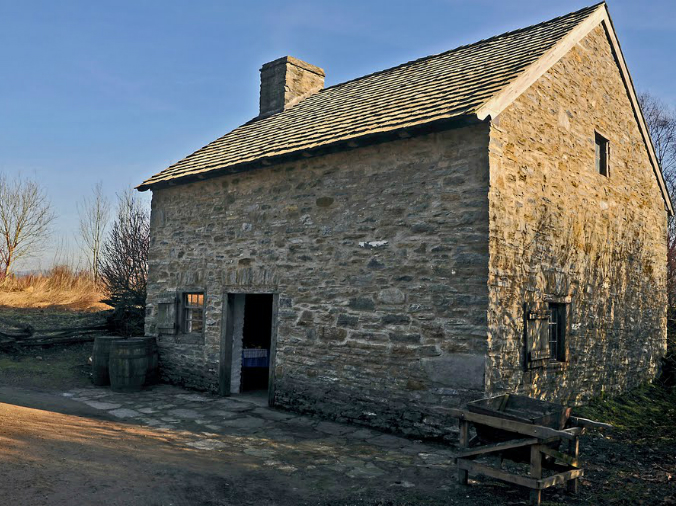 The Samuel Fulton Home, originally located in Lancaster County, Pennsylvania, was patterned after old stone farmsteads that dotted the countryside in Northern England, Scotland and Ireland.

References:
Notes on the State of Virginia by Thomas Jefferson
Domestic Architecture of the American Colonies and of the Early Republic by Fiske Kimball
Early American Architecture: From the First Colonial Settlements to the National Period by Hugh Morrison